Robert Hazen was elected Fellow of ISSOL, the leading scientific society dedicated to understanding life’s origins. This honor recognizes Hazen’s research related to the varied roles of minerals in life’s origins, as well as his studies of the coevolving geosphere and biosphere.

From the ISSOL website: “The selection is based on a member’s demonstrated exceptional and sustained contributions to the origin of life and/or astrobiology through scientific research, educational activities, or service to the Society or to this scientific community. Nominees must be members of the society. New Fellows are chosen from a panel of seven Councilors.”

November 4, 2021: “An evolutionary system of mineralogy.” Plenary lecture for the Mineralogical Association of Canada’s annual meeting in London, Ontario.

November 17, 2021: “Planetary evolution revealed through data-driven discovery in mineralogy.” To be presented at the University of Chicago.

Robert Hazen is the 2021 winner of the IMA Medal of Excellence, which recognizes lifetime contributions to the field of mineralogy. He is the tenth scientist so named since the Medal’s inception in 2008.

The award recognizes decades of Hazen’s research in high-pressure crystallography, studies of minerals and the origins of life, the development of “mineral evolution” as an approach to investigating the changing diversity and distribution of minerals through 4.5 billion years of Earth history, and his work in the emerging area of data-driven discovery in mineralogy. The medal will be presented at the July 2022 meeting of IMA in Lyon, France. Hazen will also present a plenary lecture at the conference. From the IMA website: 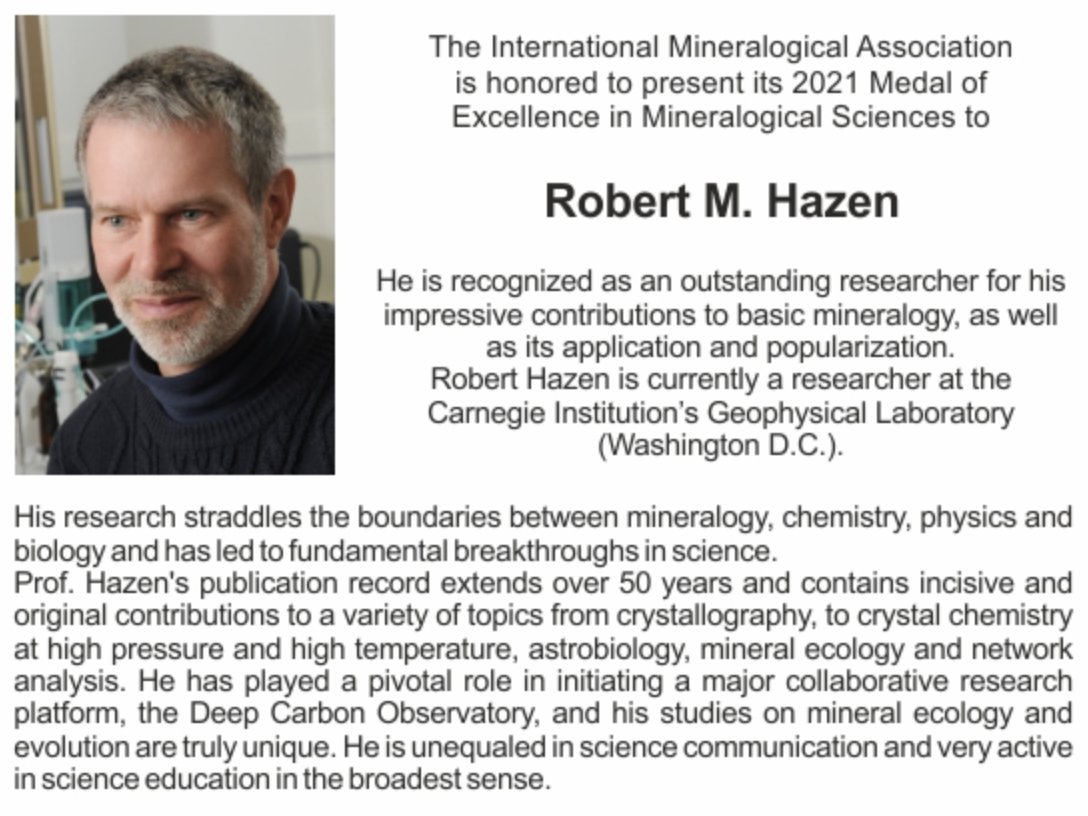 Hazen Named One of World’s Top-10 Most Influential Earth Scientists, 2021

On Earth Day 2021, the academic ranking service AcademicInfluence.com named the world’s most influential Earth scientists. On that list Hazen was ranked number 2, based on a proprietary machine learning algorithm. From their announcement:

The Earth sciences cover more than just the ground below us. It is essentially a planetary science, as it studies all of the elements that make up the physical nature of our planet. This includes everything from temperature fluctuations at the Earth’s poles to the role of pollution in climate change. It includes four main areas of study: the biosphere, atmosphere, lithosphere and hydrosphere. There are nearly infinite subdomains within those areas. Some scientists employ a very narrow focus and others view earth science holistically, as a sum of all its parts.

What do earth scientists do other than write textbooks and scholarly papers? They help our governments protect their citizens from dangerous weather events or natural disasters such as volcanic eruptions, earthquakes, tornadoes, and tropical cyclones. They crawl around in the mud, rappel into dark caves, ascend mountain summits, and log hours observing, recording, and analyzing data they have collected, in hopes of advancing our understanding of the world around us.

In what follows, we look at influential earth scientists over the last decade. Based on our ranking methodology, these individuals have significantly impacted the academic discipline of earth science within 2010-2020. Influence can be produced in a variety of ways. Some have had revolutionary ideas, some may have climbed by popularity, but all are academicians primarily working in earth science.

Note: This isn’t simply a list of the most influential earth scientists alive today. Here we are focused on the number of citations and web presence of scholars in the last 10 years. There are other highly influential scholars who simply haven’t been cited and talked about as much in the last 10 years, whereas some new faces have been making a splash in the news, speaking events, and publishing, publishing, publishing. Our AI is time sensitive. To find some of the big names you might have expected to see here, we encourage you to use our dynamic ranking system and check influence over the past 20 and 50 years.

Hazen Elected to Foreign Membership in the Russian National Academy of Sciences, 2020

Carnegie mineralogist Robert Hazen was inducted last month as a foreign member of the Russian Academy of Sciences—the nation’s highest-level scientific society, originally founded by Peter the Great. This is a rare honor for an American researcher. The ceremony, originally scheduled for the end of March, was postponed by the COVID-19 pandemic.

A Staff Scientist at Carnegie’s Earth and Planets Laboratory, Hazen pioneered the concept of mineral evolution—linking an explosion in mineral diversity to the rise of life on Earth—and developed the idea of mineral ecology—which analyzes the spatial distribution of the planet’s minerals to predict those that remain undiscovered and to assert Earth’s mineralogical distinctiveness in the cosmos.

“It is a great honor to be recognized by the Russian scientific community, which has a deep commitment to my field of research,” Hazen said. Mineralogy is a historically venerated field in Russia and Hazen’s work has resonated with his Russian peers. He is also one of just 12 Americans ever elected as an Honorary Member to the Russian Mineralogical Society.

Until 2019, Hazen was the Executive Director of the Deep Carbon Observatory, a decadal project dedicated to probing the chemical and biological roles of carbon in Earth’s interior. Looking forward, Hazen wants to develop a similarly integrated, multi-disciplinary approach to mitigating climate change.  He is also the author of more than 20 books on science, history, and music, most recently Symphony in C: Carbon and the Evolution of (Almost) Everything.

“A well-deserved congratulations to Bob on this achievement,” said Carnegie Earth and Planets Laboratory Director Richard Carlson. “Going back to the time of Norman Bowen, the research occurring on this campus has played a crucial role in understanding the planet’s mineral chemistry. Bob’s contributions to the field will be similarly remembered by future generations.”

Carnegie scientist Robert Hazen has been elected 2019 Fellow of the American Geophysical Union. Fellows are recognized for visionary leadership and scientific excellence that has fundamentally advanced research in the Earth and space sciences. “Their breadth of interests and the scope of their contributions are remarkable and often groundbreaking,” said the organization in its announcement of the new class.

Hazen is a staff scientist at the Geophysical Laboratory with an expertise in mineralogy. He is also the principal investigator of the Deep Carbon Observatory, which is dedicated to probing the chemical and biological roles of carbon in Earth’s interior.  He pioneered the concept of mineral evolution—linking an explosion in mineral diversity to the rise of life on Earth and the resulting oxygen-rich atmosphere—and introduced the idea of mineral ecology—which analyzes the spatial distribution of Earth’s minerals to predict which ones remain undiscovered and to assert our planet’s mineralogical distinctiveness.

The AGU is an international nonprofit scientific association with 60,000 members in 137 countries. Only one out of every thousand members are selected as Fellows each year.

Robert Hazen and colleague Yana Bromberg (Technical University of Munich / Rutgers University) are co-chairing the Organizing Committee for an upcoming workshop on data-driven discovery in the Earth sciences. The 4D Workshop: Deep-time Data Driven Discovery and the Evolution of Earth will be convened June 4-6, 2018 in Washington DC thanks to generous support from the Alfred P. Sloan Foundation, NASA, the Keck Foundation, the Earth Life Science Institute (Japan), the Carnegie Institution for Science, the Templeton Foundation, and others.

Workshop organizers aim to explore ways to advance our understanding of Earth’s complex co-evolving geosphere and biosphere through the collection, analysis, and visualization of large and growing data resources. Thanks to years of intensive efforts in developing the Keck- and Sloan-supported Deep-Time Data Infrastructure (http://dtdi.carnegiescience.edu), which analyzes, quantifies, and visualizes Earth history as a system of patterned co-evolving networks, researchers are poised to make transformational advances in understanding the planet’s evolution.

The 4D Workshop for Deep-Time Data Driven Discovery will be convened as prelude to a potential long-term program to invent, modify, and apply emerging methods of data analysis and visualization to elucidate the planet’s past, present, and future. Earth’s evolution has been an intertwined succession of increasingly complex physical, chemical, and biological events. Keys to discovery lie in the continued integration, development, and exploitation of data, facilities, and expertise. The 4D Workshop will gather bio-, geo-, and data experts from around the world to explore pathways to a deeper understanding of the origins and evolution of our home and ourselves.

For more information about the workshop, visit www.4d-workshop.net 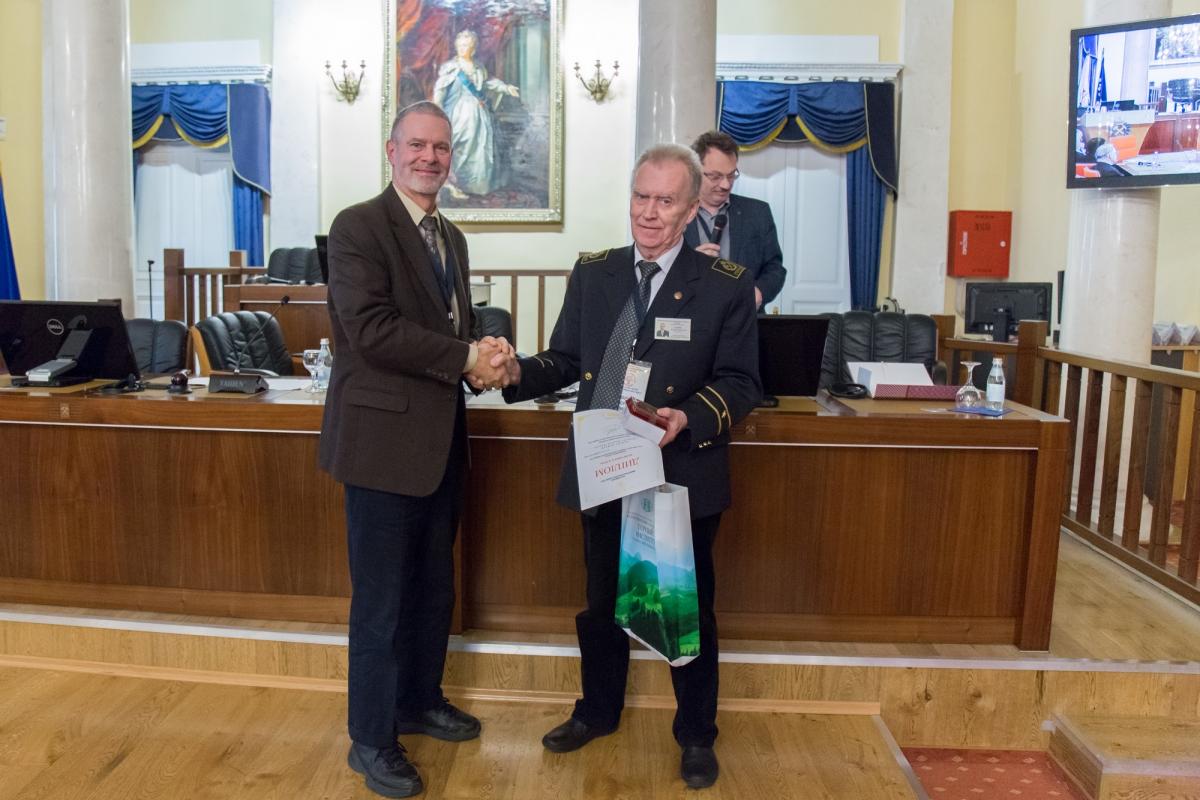 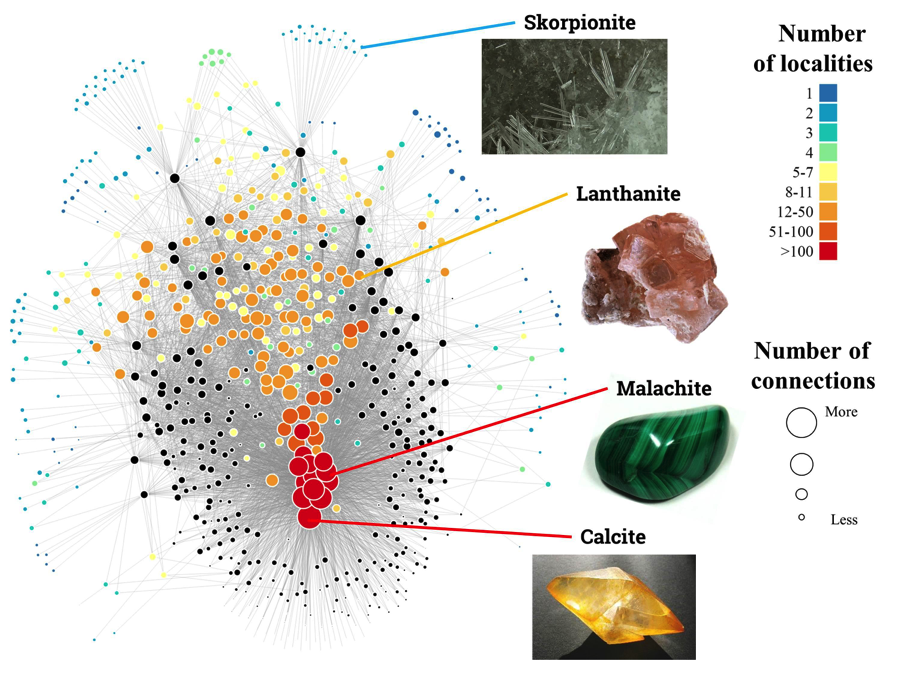 Applying big data analysis to mineralogy offers a way to predict minerals missing from those known to science, as well as where to find new deposits, according to a groundbreaking study.

In a paper published by American Mineralogist, Hazen and colleagues report the first application to mineralogy of network theory (best known for analysis of e.g. the spread of disease, terrorist networks, or Facebook connections).

The results, they say, pioneer a potential way to reveal mineral diversity and distribution worldwide, their evolution through deep time, new trends, and new deposits of valuable minerals such as gold or copper.

Says Dr. Hazen: “Network analysis can provide visual clues to mineralogists regarding where to go and what to look for. This is a brand new idea in the paper and I think it will open up an entirely new direction in mineralogy.” 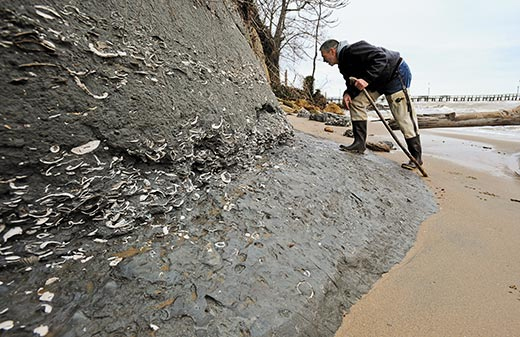