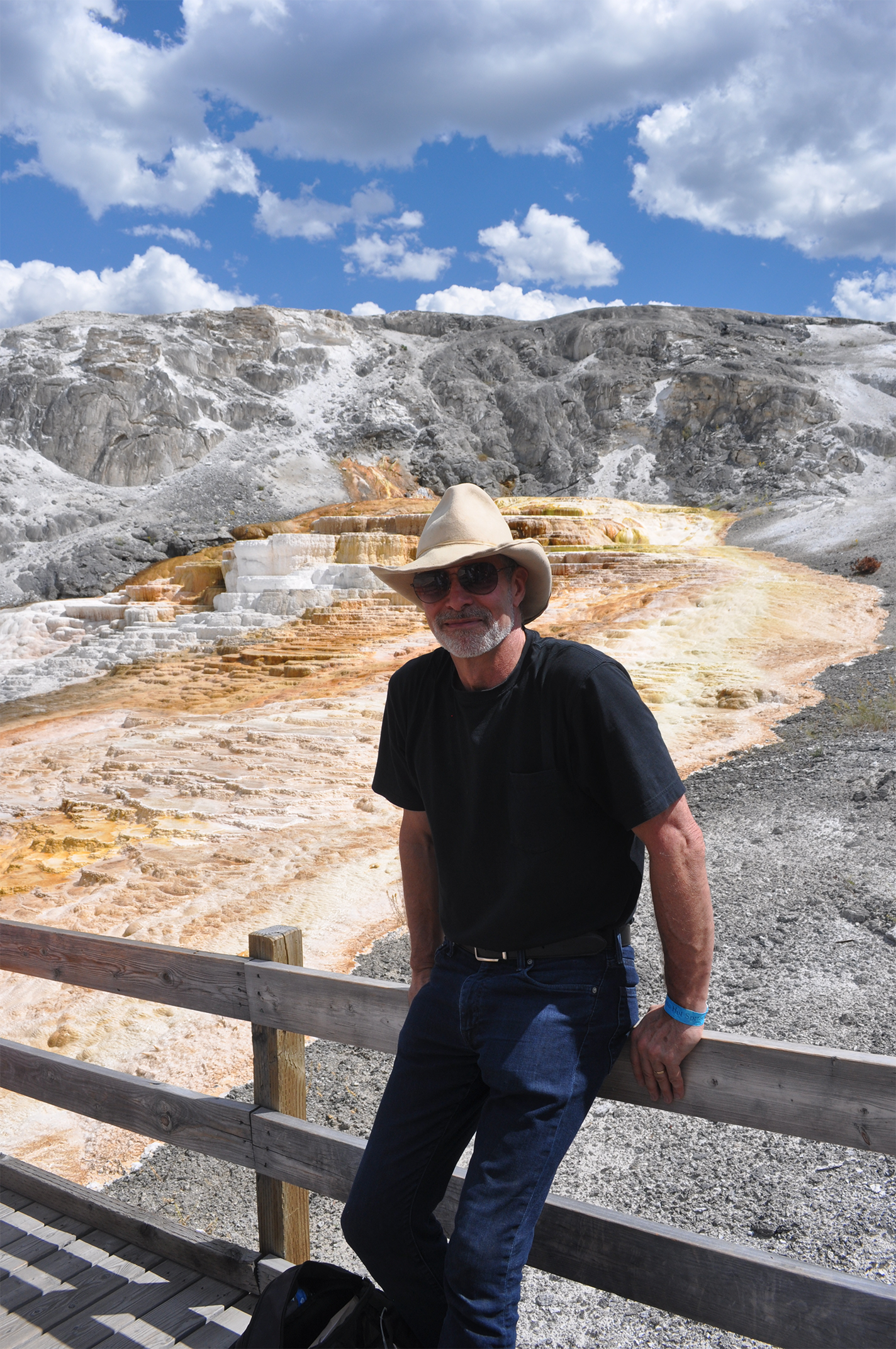 From 1971 to 1999 most of Robert Hazen’s scientific research focused on the close relations between crystal structure and physical properties. He developed several high-pressure and high-temperature techniques and applied these techniques to understanding effects of temperature and pressure on atomic arrangements, particularly in deep Earth environments – work summarized in Comparative Crystal Chemistry (Wiley, 1982) and the edited volume High-Temperature and High-Pressure Crystal Chemistry (Mineralogical Society of America, 2000). He studied a wide variety of materials, including lunar minerals, ceramics, ferroelectrics, solidified gases, and organometallics. Hazen led the team of Carnegie scientists who first isolated and identified several new high-temperature superconductor structure types. Some of these studies are summarized in Breakthrough: The Race for the Superconductor (1988), The New Alchemists (1994), and The Diamond Makers (1999).

In January 1989, Hazen joined the faculty of George Mason University as Clarence J. Robinson Professor of Earth Sciences. This opportunity arose from his interest in engaging students of all ages, especially students who are not science majors, in the natural sciences. Science is central to all our lives, and a firm grounding in scientific literacy informs our citizens in a broad range of topics related to health, environment, resources, business, and education. Science is also an engine of discovery, and represents a great human adventure. Accordingly, he has developed undergraduate courses in scientific literacy (with Prof. James Trefil), scientific ethics, symmetry in art and science, and the image of the scientist in popular culture, as well as graduate seminars in astrobiology and the origins of life. Their writings include the bestselling Science Matters: Achieving Scientific Literacy (Doubleday, 1990; 2nd edition, 2010) and The Sciences: An Integrated Approach (Wiley, 1993; 8th edition, 2015). He has been active in national efforts to reform science education and has presented lectures and workshops on undergraduate science curricula at more than 100 colleges and universities. He contributed as a writer for the National Science Education Standards, and served on the Executive Board of the National Research Council’s Committee on Science Education, as a member of the American Association for the Advancement of Science’s Committee for the Public Understanding of Science and Technology, and on the National Academy of Sciences’ committees to write Teaching About Evolution and the Nature of Science (1998) and to revise the influential pamphlet, Science and Creationism (3rd edition, 2007).

In 1996, thanks to a new perspective on science research opportunities fostered by teaching integrated science, Hazen began research on high-pressure organic synthesis and the varied roles of minerals in processes that led to the origins of life. Working with a team of scientists at the Carnegie Institution, he developed a proposal to join NASA’s Astrobiology Institute to study physical and chemical environments of high-pressure hydrothermal systems and their possible role in prebiotic organic synthesis and the origin of life. Recent research projects include studies of mineral-mediated organic synthesis, the role of minerals in stabilizing organic compounds, the nature of mineral-molecule interactions in aqueous solutions, and the chiral selectivity of enantiomeric mineral surfaces. He is also active in the development of micro-analytical tools for paleontology. Some of this work is summarized in Genesis: The Scientific Quest for Life’s Origins (National Academy, 2005) and in The Story of Earth (Viking, 2012). The latter book served as the basis of an episode of NOVA (WGBH-TV), which aired in January 2016.

In 2006 Robert Hazen began studies in the changing diversity and distribution of minerals in the near-surface environments of Earth and other terrestrial planets and moons, a field that he called “mineral evolution.” Earth’s mineralogical history is thereby divided into ten stages, each of which saw significant changes in near-surface mineralogy. Principal findings include the realization that different planets and moons achieve different stages of mineral evolution. Furthermore, as many as 60% of known mineral species on Earth probably could not have appeared prior to the origin and evolution of life. Recent mineral evolution studies reveal significant correlations between Earth’s near-surface mineralogy and the supercontinent cycle, changes in atmospheric and ocean chemistry, and the emergence of the terrestrial biosphere.

These studies led in the Summer of 2014 to recognition that mineral diversity-distribution data display many of the trends known for ecosystems. For example, mineral distributions conform to Large Number of Rare Event (LNRE) frequency distributions. LNRE statistical models lead to predictions of the type, age, and localities of Earth’s “missing” minerals—species that occur on Earth but have not yet been discovered. These new methods may help to transform aspects of mineralogy from a descriptive to a predictive science. Hazen is also active in the study of emergent systems (especially their relevance to origins of life), the quantification of complex systems (through the formalism of functional information), and the evolution of complex systems under selective pressures.

Hazen is Executive Director of the Deep Carbon Observatory (DCO), a 10-year effort to achieve fundamental advances in understanding the chemical, physical, and biological roles of carbon in Earth (http://deepcarbon.net). The DCO has more than 1,000 collaborators from 45 countries with total funding from governmental, corporate and private sources exceeding $500 million. In addition to his studies of carbon mineralogy through Earth history, Hazen is responsible for the integration and synthesis of all of DCO’s diverse research projects, which collectively address the quantities, movements, forms, and origins of carbon in Earth.

POPULAR WRITING IN HISTORY AND SCIENCE

Hazen, frequently in collaboration with his wife Margaret Hindle Hazen, has written several books and many related articles on aspects of the history of American science and society. Previous works include American Geological Literature and North American Geology (a bibliography and review, respectively, of early American geological research), Wealth Inexhaustible (a history of American mining and other mineral industries), and The Poetry of Geology (a collection of geological poetry of the 18th and 19th centuries). The Breakthrough: The Race for the Superconductor (Summit, 1988) is his popular account of the discovery of high-temperature superconductivity. The Hazens also wrote Keepers of the Flame (Princeton, 1990), a cultural and technological history of fire in early America, published by Princeton University Press. Hazen’s books, The New Alchemists: Breaking through the Frontiers of High-Pressure Research (Times Books, 1994) and The Diamond Makers (Cambridge University Press, 1999), explore the history of diamond making and other high-pressure applications.

In 1990 Hazen, with physicist James Trefil, wrote Science Matters: Achieving Scientific Literacy (Doubleday, 1991; second edition 2009), which now has more than 250,000 copies in print in a dozen languages. That volume proposes a definition of scientific literacy based on overarching scientific principles. In conjunction with the book Hazen has appeared on NBC’s The Today Show, CBS’s Nightwatch, NOVA (WGBH, Boston), and numerous other national and local TV and radio programs. Hazen also contributed articles and editorials to Newsweek, The New York Times Magazine, Chronicle of Higher Education, The Scientist, and other periodicals. Hazen and Trefil have also written three undergraduate textbooks that amplify these themes, The Sciences: An Integrated Approach (Wiley, 8th edition, 2015), The Physical Sciences (Wiley, 1996), and Physics Matters (Wiley, 2003). The Sciences also served as the basis for Hazen’s 60-lecture video and audio course, “The Joy of Science,” which is distributed nationally as part of the Great Courses series (The Teaching Company, Chantilly, Virginia). Why Aren’t Black Holes Black: Unanswered Questions at the Frontiers of Science (Anchor, 1998), written with Maxine Singer, adopts the style of Science Matters, but focuses on the most compelling unanswered questions that drive today’s science. Genesis: The Scientific Quest for Life’s Origin (Joseph Henry Press, 2005), with a companion 24-lecture series, “The Origins of Life” (The Teaching Company, 2005), surveys the origins-of-life research field.

Hazen’s most recent book, The Story of Earth (Viking, 2012) examines more than 4.5 billion years of Earth history framed in the context of the coevolving geosphere and biosphere. The Story of Earth was named a semi-finalist in the 2013 Royal Society (London) Science Book Prize, a finalist in the 2013 Phi Beta Kappa Science Book Prize, and one of Kirkus Reviews “top 25 non-fiction books” of 2012. The book, and the thematic subject of mineral evolution, will be the basis of an episode of NOVA (WGBH TV, Boston) now in production and to be aired in the Fall of 2015. The book has also been developed as a 48-lecture video/audio course in the Great Courses series, published by The Teaching Company (2013).