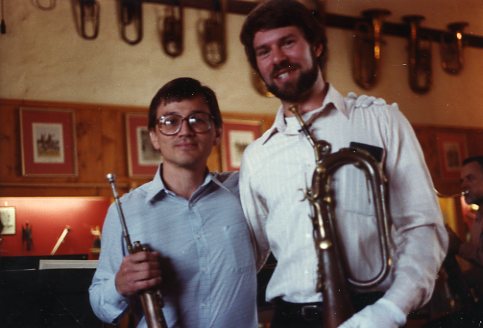 HAZEN'S CAREER AS A PROFESSIONAL MUSICIAN

In 1967 he co-founded the Cambridge Symphonic Brass Ensemble, a brass quintet that thrives to this day. They performed hundreds of concerts and recitals throughout New England, including the first performances of the Christmas Revels at Sanders Theater in Cambridge, the first Ascension Day brass concerts from the Tower of the Busch-Reisinger Museum on the Harvard University campus, and many concerts at the Castle Hill Music Festival.

He has performed as an extra trumpeter with numerous ensembles in Europe and North America, including the Boston and National Symphonies; Orchestre de Paris; the New York, Boston, Washington, and Metropolitan Operas; and the Jeoffrey, American, Washington, Baltimore, Kirov, and Royal Ballets. His frequent appearances with National Symphony Orchestra include performances with Mistislav Rostropovich, Erich Leinsdorf, Antal Dorati, and Leonard Slatkin. He performed with the NSO on their 2004 national tour, including performances at Carnegie Hall.

He continued to perform on historic instruments until 2012 with such ensembles as the Washington Bach Consort, the Folger Consort, the Handel Choir of Baltimore, the Cathedral Choral Society, the Wolf Trap Opera, and the Washington Bach Sinfonia. Hazen has recorded on both modern and historic instruments with ensembles on DDG, Pro Arte, New World, Nonesuch, Smithsonian, and AMI records.

Robert and Margaret Hazen are authorities on the history of bands in America. They assembled one of the largest collections of brass band ephemera in the world and they wrote The Music Men: An Illustrated History of Brass Bands in America (Smithsonian Institution Press, 1987), which won the 1989 ASCAP Deems Taylor Award. They subsequently wrote the script and appeared in a documentary film on the history of bands, produced by SIRS Inc. and shown on PBS TV. The Hazen Collection of Brass Band Ephemera is now preserved in the archives of the Smithsonian Institution. More than 100 historic brass instruments collected by Robert Hazen are also in the collections of the Smithsonian Institution, the Boston Museum of Fine Arts, and the National Music Museum (Vermillion, South Dakota).

Robert and Margaret Hazen performed as semi-professional Renaissance dancers from 1972 to 1984. They were members of the Cambridge Court Dancers (Boston) and the Dupont Circle Consortium (Washington) in numerous venues, including the Boston Museum of Fine Arts, the Cloisters, Dumbarton Oaks, the Folger Theatre, and the Smithsonian Institution.

Robert Hazen is also an amateur cellist. He plays regularly with Margaret Hazen (a violist) and a growing circle of musical friends. They completed their first Beethoven string quartet cycle in 2012 and are now engaged in a Shostakovitch cycle. 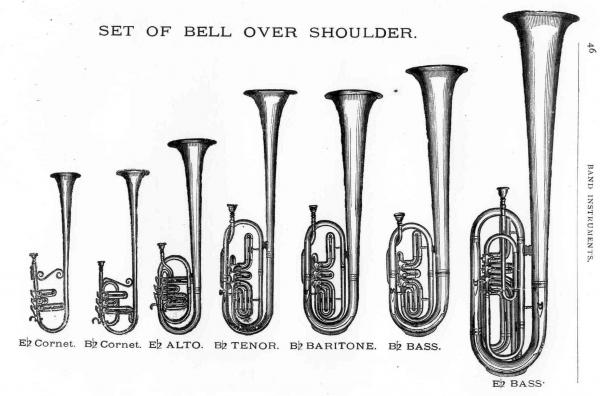 The Hazen collection of historic brass instruments consists of approximately 25 natural, keyed, and valved soprano brasswinds from c.1800 to the modern era. Highlights of the collection include Eb saxhorns by J. Lathrop Allen and E. G. Wright, as well as a set of matched 19th-century British Eb natural trumpets.

Robert Hazen was a dealer in historic brass instruments in the 1980s. Many of his most important finds are now in the Smithsonian Institution collection, which acquired approximately eighty 19th-century cornets, saxhorns and other brass instruments from him. An important collection of keyed bugles was acquired from Hazen by the Shrine to Music Museum in Vermillion, South Dakota.

Joseph Forestier’s “Fantasie Brilliante” (c.1842): Performed at the Corcoran Gallery of Art, January 25, 1992, on my Washington Chamber Symphony recital. That night we had a horrible slushy snow storm and I almost had an accident getting to the museum. Many people who bought tickets didn’t show, so they sold them at the door, filled the house, and ended up selling more tickets than seats! The great pianist was Dale Anthony, who died of AIDS a few years later. This “Fantasie” was one of the first pieces ever written for valved brass and keyboard, and was one of each such solos I discovered bound together in an old Parisian volume. They are described in my article: Hazen, R. M. (1995) Parisian cornet solos of the 1830s and 1840s: The earliest solo literature for valved brass and piano. International Trumpet Guild Journal May 1995, 34-38. Other pieces on the recital included concertos by Telemann and Haydn, the Purcell Sonata, and the Saint-Saens “Septet” Op. 14 with members of the Washington Chamber Symphony. [play]

Vejvanowsky, “Concerto for Symphony Orchestra” as performed by the Washington Chamber Symphony, September 16, 1987, at the Terrace Theater of the Kennedy Center in Washington. Trumpets include Robert Hazen, Dennis Edelbrock and Dan Smith. (12’25”) [play]